The waterfront of Inverclyde has an incredible history, industrial potential, and breath-taking views. It is the jewel in Inverclyde’s crown, and yet listed buildings and icons of the past are left to go to ruin. Our industrial potential has lain dormant through lack of investment or poor management and we have not taken advantage of leisure and tourist opportunities.

These are political issues, which require political solutions. Much of Inverclyde is blighted with poverty and deprivation; this is an area, which desperately needs investment and jobs. We need an overall vision for the waterfront – too much of the planning has been piecemeal, preventing more ambitious projects to be imagined. We need to attract investment in our local industries and support local initiatives to showcase our history and create a place for tourism and leisure to flourish. 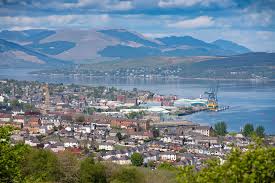 The Covid-19 pandemic has had a significant impact in Inverclyde. As well as the casualties of this virus there has been a momentous social impact to the lockdown. Most local children have not attended schools at all since 20th March 2020 and there is a real concern among parents about pupil’s education. Inverclyde Council receives significant financial resources via the Scottish Attainment Challenge (SAC) and Pupil Equity Funding (PEF) projects. I am concerned with how these funding streams being used to address the challenges of the lockdown on pupil’s education. During the early phase of this pandemic, significant resources were – quite rightly – directed into the NHS to increase capacity and purchase equipment.

As we move out of lockdown, it will be important to make a similar step-change in investment in education provision. Mental health issues are already a significant problem in society. The social isolation and impacts of lockdown will have been a struggle for many young people. I am deeply concerned about lengthy waiting times for access to Child and Adolescent Mental Health Services (CALMS).

Like many other people, I was appalled at the death of George Floyd in the USA, and have been following the Black Lives Matter protests taking place here and abroad. Sadly, there have been many such deaths over the years, but this one has caught the public imagination. The circumstances have prompted other nations to consider their own track records on racism and their roots in slavery.

Many comments in the media suggest that slavery was a thing of the past, but although the Slavery Abolition Act was passed in 1833, currently in 2020, slavery affects 40.3 million people worldwide – more than at any other time in history.

Experts have calculated that 13 million people were captured and sold as slaves between the 15th and 19th centuries, yet there are more than 3 times that number living in some form of slavery today. Women and girls make up 72% of slaves and children account for 25% of all victims. Modern slavery takes place across the whole world and there are slaves today in the UK and here in Scotland.